#261
It actually looks better than the pic - flare due to lighting messes it up a lot. Down here coreflute is not nearly robust enough for this job, IMHO.

#262
Not sure where "down here" is but perhaps it is the rougher side of the city? Anyhow the coreflute pictured (sorry about the quality of the pics) has been in for over 5 years so far, though admittedly I don't subject it to overly rough treatment.
Interestingly and surprisingly the townhouse we have recently downsized to has coreflute as a cladding for the garage door. The architect did a superb job on most of the design so hopefully it will work. May last longer than the western red cedar we had in our previous home.

#263
Mike....you know where I am. Your lining is certainly very good! Maybe I need to remove mine and redo it with a very flat black. The coreflute I have experience of (election posters) didnt cross my mind as suitable. Next time will consider it.
Next interesting bit.
I like LEDS for all the external bulbs, so did all of them, except headlights of course. One stop/tail lit up wrong, had to reverse the stop and tail wires, thinking it was messed up when the high centre brake like was tapped in. Then I noticed that the centre brake light lit up (a little dimly) when the side lights were on, but brightly when the brakes were applied. When I isolated the centre brake light lead I found that when 12V went into the sidelight 5W circuit, 8.4V came OUT of the 21W connector. Out came the LEDs, in went the old incandescents, works properly. Also put the wiring back to the way it ought to be, correct filaments now working. So, as well as leaking voltage out, one LED bulb was incorrectly connected inside.
Last edited: Aug 13, 2021

#264
Yep, just wasn't sure when you said "Down here coreflute is not nearly robust enough".
I'd actually bought the corflute at Bunnings to use on the grandkids' cubby house, now demolished, and then thought it might be suitable for the boot lid. It's actually 6+ years ago, time flies.

Put in LEDs some time ago and had a few problems some time later which caused me to replace the 3 way light switch (Series 1) and do a lot of fiddling with terminals until it all came good.
LEDs made the instruments legible at night for the first time in decades.

#265
Dedion boot!
With the wheels hanging I pulled the old boot clear and saw this:-= 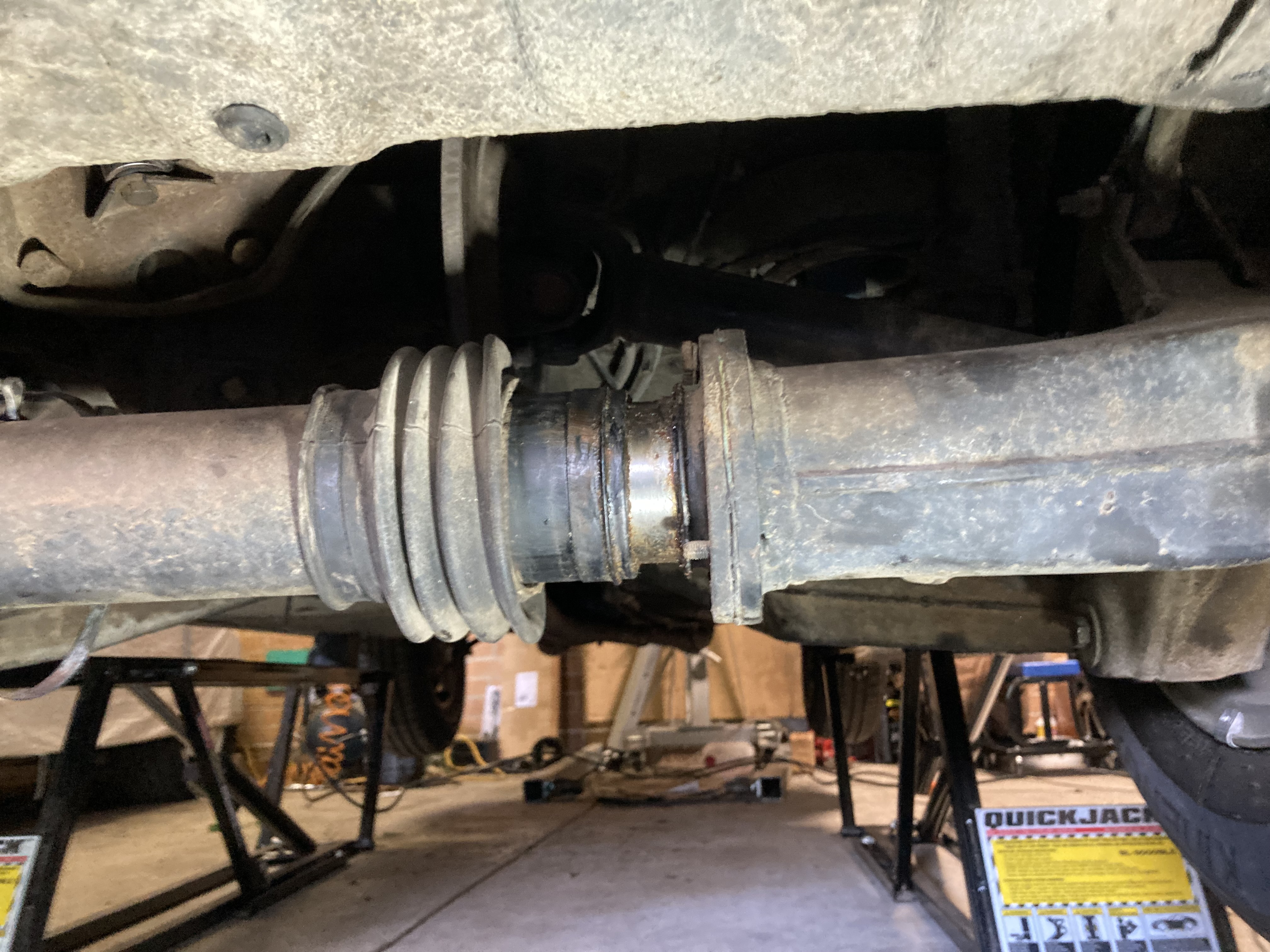 Not enough clearance to get the new boot past the studs, so I jacked both wheels a bit, and finally got just enough space to get the boot in place. The struggle to stretch the boot over the end flange felt like it must do giving birth....being careful to use blunt persauders to avoid puncturing the new boot. Had to jack both wheels a bit to get enough space between the elbow and the tube to feed the new boot past the studs. Cleaned the old dry grease off and applied some new stuff to the visible tubing. The boot from MGBD seems pretty robust, well made.
The old boot was well past its use by date. 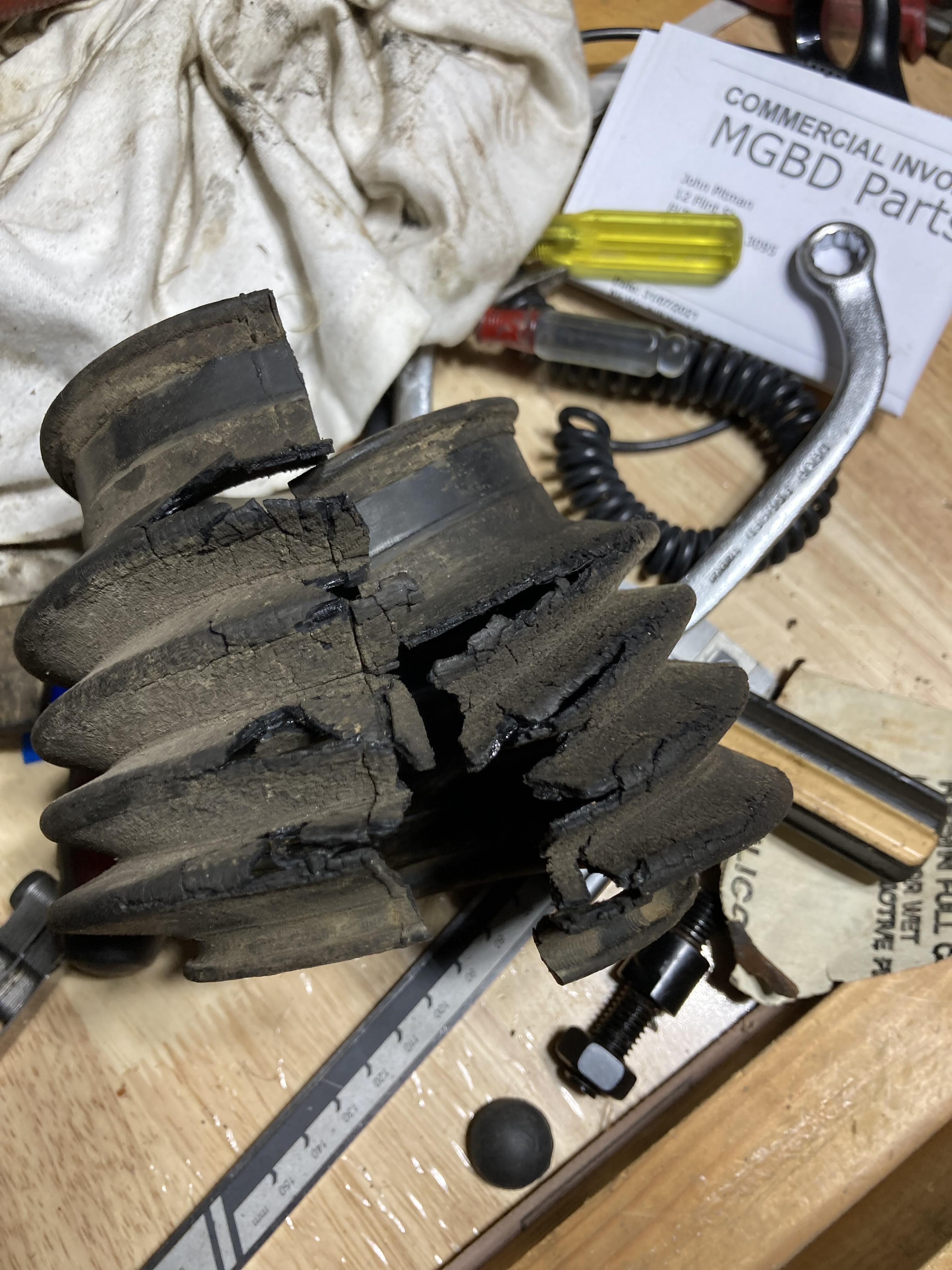 #266
Boy that is bad.
I have a slight split in mine which we have managed to tape and glue up, with a new one in the boot (trunk) bought locally - well Mark in central Victoria - to be put on in due course.
Just as a matter of interest did you refill with engine oil or have you taken the greasing route which many seem to advocate.

#267
Mike, Mine is a greased type - no oil filler present. I suspect the boot is original, or at least been there a VERY long time. The damaged area was facing forward, none of it visible from the rear. There was a little dried grease visible, which I cleaned off, and replaced with some fresh black grease, as used in CV joints - seems greasier. Being a bit leary of unnecessary travel to settle the boot - left the big clip loose, placed some wet glossy plastic under the rear wheels and lowered the jacks. The boot expanded to about double its width with the wheels hanging. Lifted and lowered again, did some sideways and up-down rocking to try to ensure full extension, the tightened the big clip after lifting the lip with a small driver to ensure no pressure or vacuum. The parts book only lists one number for the tube, despite the obvious difference of oil filler in some, not on the later types.

#268
Thanks.
Will probably stick with oil as it probably requires a total dismantling of the tube to complete a first time grease.

#269
gone the grease route on mine. The rubber boot has been insitu for 10 yrs and still all intact.

#270
When I tried to fix my wiper delay unit I found it hard to get the right size rubber/foam behind the clip to control the valve, so that pushing the rod would blow air out, but seal when the spring tried to push the rod out. Just got a genuine NOS unit, and it leaked as delivered. On removing the metal clip, the black foam in there disintegrated. I cut a new piece of foam, BUT i also smeared the inner face of the valve disc with vaseline - now it holds vacuum fine. With the bleed nipple blocked there was some resistance to pushing the rod, so I thinned the foam a bit. The new unit came with a different orientation on the bracket, so I had to rotate it some - holes already available. To make it easier to install I cut slots from the mounting holes to the end, so I could have the screws started, and slide the bracket in - all back now. The reason my origoinal had its bleed nipple broken off appears to be the original black tube is as hard as, so I fitted a few inches of thick wall rubber vacuum tubing as a bridge to the nipple. Should all work now, as long as the tube to the adjuster is OK, and the adjuster doesnt leak. Tests for another day.

Staff member
#272
I had similar issues with the cover plate for the lower end of the flywheel. The bolts into the LT77 bellhousing were metric but the two up into the rear of the block, even though a much newer part were imperial. I don't think there's any rhyme or reason to it to be honst.

#273
A few things missing on this EFI manifold - any idea what screw spec is used to hold the TPS on the throttle body area please? Have tried all the taps I have, nothing fits....
thanks

#275
Yes! Thank you! The one hole I was trying was a little damaged/dirty - other hole took an M4x.7 readily. Cleaned up the first hole, all good now.

#276
Small tidy up today - left rear door was binding on something, not closing or opening cleanly. Tried the striker, but that wasnt it. Read the book on the anti-burst pin....removed it (needed adjustable jaw pliers - we call them cocky-beaks), door shut very cleanly. Added a washer under the pin as advised by the book, beautiful, smooth, free.
Another small success.

#277
looking around underneath....lets check the prop shaft UJ alignment. One arrow a little hard to find, but in the end...close to 180d out of alignment. Havent noticed any vibration, but so far have only done a few 100 kms. The gearbox has been out and opened by barbarians ( had some sort of EP in it), so not too surprising. Fixing this will give me something to do while we hope for an easing of the lockdown soon.

#278
The rear UJ bolts must be the tightest such bolts I have ever struck! Really had to swing hard on them. Shaft was badly surface rusted, some signs of scratching at the line of the hand brake cable boot - dont how that would have come into contact. Shaft all cleaned up, nice coat of black on it, ready for re-install.
Now that I have access to the gear linkage....the rear shaft bush looks like grey/black plastic, with a ridge on the front end, with no means of location, so of course it comes out of the alloy , and allows the shaft to drop a bit, NOT improving the feel of the lever and selection. Tried to fit a circlip over the rear end, but didnt have anything the right size, and stretching one over the shaft tends to over extend them, and they lose tension.The front bush looks like bronze, and seems to have a clip on it to hold it in place - not shown in the parts book. Anyway, how to stop the rear bush moving....piece of tubing of just the right length! Found a piece of garden hose of about right ID, cut to length (~165mm), slit down its length. Lubed the rod, slid the hose on. Pushed its front end up over the bush, tied it with a cable tie Fitted a cable tie to the rear end of the hose as well. Gear change feels maybe a little stiffer, but not significant. Time will tell if it stays in place... 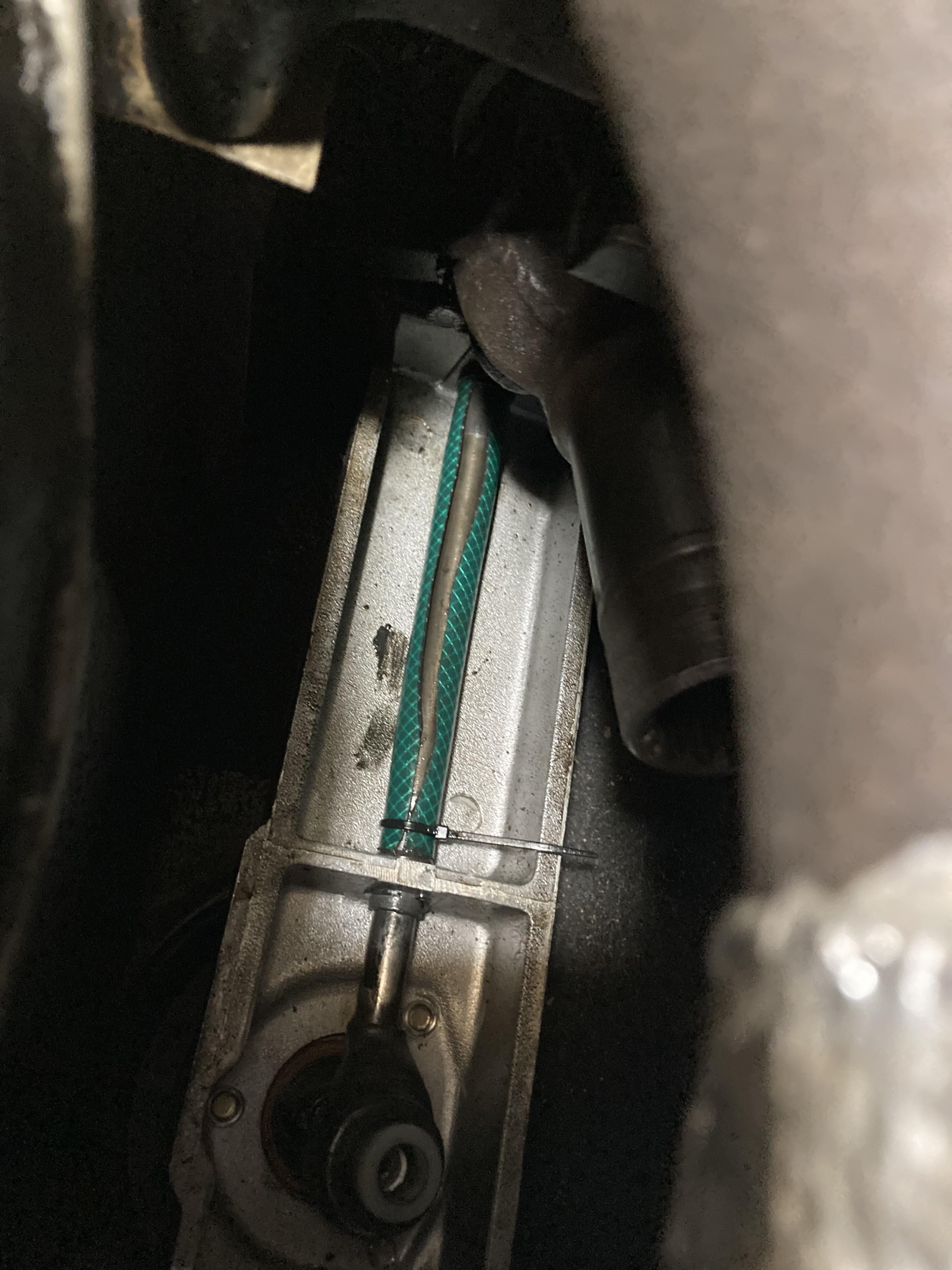 Staff member
#279
jp928 said:
The gearbox has been out and opened by barbarians ( had some sort of EP in it)
Click to expand...
When I bought mine I was told the LT77 had been rebuilt by a specialist but it was full of something EP thick n gooey. I had to drain it, wash it out with a mixture of Redline MTL and white spirit, then drain again and leave it overnight, then refill with Redline MTL. Smooth as silk now but before, changing gear was like stirring a saucepan of potatoes

#280
While I was cleaning the prop shaft I noticed a part no on one end - 533535. Not in the 3500 parts book, but it is listed as the shaft for a 2000 sc/tc. It fits fine, so...should I worry ? It seems to be same dia as the 3500 auto shaft I have for the LT77 transplant, just longer. Probably should have looked this up before I reassembled it all. Does this mean the alignment marks are incorrect for a late 3500 - D chassis?
The shaft is now exactly aligned as a normal one would be - yokes in alignment. The auto shaft is aligned as book says for late 3500 ~144d. , which is 2 splines off straight alignment. I find the 144, and 107d, odd - the sliding section has 16 splines, which means the smallest deviation is 22.5deg, and you cant get an offset of either of those listed, IF you start with a shaft that can have its yokes straight aligned.
Do I need to to shift the shaft 2 splines while its easy, or suck it and see?
Last edited: Oct 15, 2021
You must log in or register to reply here.
Share: Facebook Twitter Google+ Reddit Pinterest Tumblr WhatsApp Email Link
Top